CDP-choline is a nucleotide that is composed of choline, cytosine, ribose, and pyrophosphate. 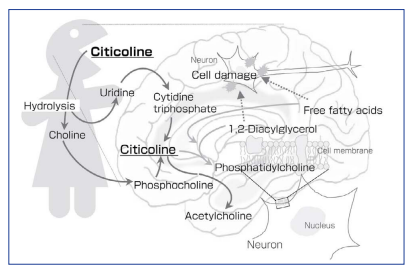 Citicoline is a supplier of choline and, therefore, delivers all the benefits of choline. Both choline and citicoline provide phospholipid metabolism, acetylcholine production, and cell signaling. Only citicoline is also a source of cytidine. It is the cytidine element that gives citicoline an advantage over choline. The cytidine element of citicoline converts to uridine before crossing the blood-brain barrier. The uridine is needed for the step of phosphatidylcholine production and also stimulates neuronal growth. Uridine is the molecule liable for increasing brain levels of norepinephrine and dopamine, enhancing mitochondrial function, and boosting energy production in the brain.

Neurotransmitters are essential communication molecules in the nervous system. Acetylcholine behaves as a neurotransmitter in the mind that stimulates alertness, attention, learning, and memory. Disturbances in acetylcholine function are associated with memory problems like Alzheimer’s disease. A direct precursor for acetylcholine production is choline. Animal studies showing that citicoline provides a source of choline to increase acetylcholine production in the hippocampus and the neocortex of the brain. In addition to providing as a choline donor for acetylcholine synthesis, citicoline has been demonstrated to boost norepinephrine in the cerebral cortex and hypothalamus and improve serotonin in the cerebral cortex, striatum, and hypothalamus. Citicoline additionally raises dopamine levels in the corpus striatum by increasing tyrosine hydroxylase action and thus, blocking dopamine reuptake.

The capability of citicoline to improve phospholipid metabolism and reduce oxidative stress would suggest that it has a neuroprotective effect. Additional mechanisms also add to the neuroprotective effects of citicoline. Citicoline controls excitotoxicity by reducing glutamate activity and increasing expression of excitatory amino acid transporter-2 (EAAT2); it has demonstrated an ability to upsurge glutathione synthesis; and citicoline enhances neuroplasticity after a stroke, signifying that it helps brain cells reorganize and form new connections to compensate for injury or disease.

The most important use of citicoline in clinical practice is to support brain health. Healthy young adults and teenagers can take Citicoline to foster attention and focus or healthy older adults to help cognitive function. Citicoline is widely recommended as a medication in Europe to treat cognitive impairments and has been studied as an intervention for mental recovery after ischemic stroke. In addition, emerging research suggests that citicoline may also support eye health and promote recovery from addictions as well as eating disorders.

Citicoline is considered a nootropic agent, meaning that it enhances focus, attention, and cognitive function in healthy individuals. Two recent placebo-controlled trials have demonstrated the benefits of citicoline in healthy adults and teens. 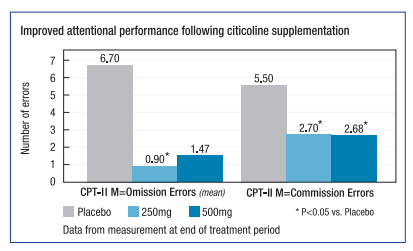 Normal brain aging is associated with diminishing concentrations of phosphatidylcholine in cell membranes and gradual changes in acetylcholine metabolism and function. Unfortunately, there are fewer studies of citicoline in healthy individuals than in those with existing pathology, but the existing studies have produced promising results. 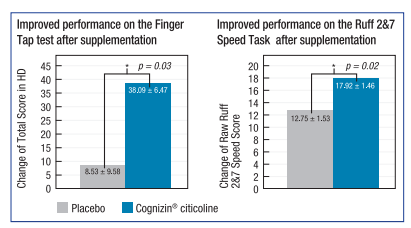 Numerous human clinical trials have been conducted on the effects of citicoline in patients with cognitive impairments resulting from a head injury, stroke, or other causes. Most of these studies suggest that citicoline supports mental health and neurological recovery.

The mass of citicoline clinical trials—particularly those involving healthy adults and teens—have used dosages of 250 mg or 500 mg per day. Both of these dosages have produced beneficial effects. Dosages as high as 2,000 mg per day have shown benefits in patients with addictive disorders, and dosages of 2,000-4,000 mg per day for 6-12 weeks produced more significant improvements than lower dosages in patients recovering from a stroke.